Jordan in one week

Jordan in One Week

Jordan In One Week

I’ve been dreaming about Jordan for a long time and last year I finally decided to onboard in one of my favourite adventures ever. For one week I’ve done a road-trip around this amazing Middle Eastern country which combines a rich historical heritage, stunning archaeological sites, breathtaking natural landscapes and the most genuine and welcoming people.

I stayed in Jordan exactly 8 days and I wouldn’t recommend less than that because there is so much to discover and explore from ancient cities and the vastness of the desert to coastal beach areas and the Dead Sea.

Probably you want to go to Jordan to visit Petra. Who hadn’t dreamt of visiting one of the most iconic landmarks in the globe. There is a reason why this ancient Nabatean city in the Southern of the country is considered one of the new Seven Wonders of the World.

It is not known exactly when Petra was built, but the city began to prosper as the capital of Nabatean kingdom from the 1st century BC. Later it was annexed to the Roman Empire until a large earthquake destroyed most of it. It remained deserted for centuries, except from local Bedouins, until a Swiss explorer rediscovered the lost city in 1812. From that moment it has attracted visitors from all over the world.

When in Jordan going to Petra is mandatory and this is definitely one of those places that leaves you speechless. Be aware that Petra site is huge, so be prepared to walk and hike a lot (I walked more than 20km in one day!) but you will be rewarded by the most amazing sights you’ve ever seen. I spent there one entire day and it was not enough to visit everything. I also recommend that you arrive as early as possible (I started my day at 6am) to take the most of your time there and avoid the crowds.

When you arrive to Petra you start your journey entering the Siq, a narrow and dim gorge that takes you to the Treasury, which is probably the most known and magnificent monument in Petra sculpted into sandstone rocks with its almost 40 meters high and Corinthian decorations.

After wandering around the Treasury it is time to explore the other amazing sights of Petra. If you only have one day there, you might have to select where you want to go, so I will share the ones that I visited.

I started by the the Theatre, the only theatre in the world carved into the rocks. You can find it at the foot of High Place of Sacrifice, a place of workship on a mountain plateau (I didn’t have time to visit it but it seems to be also amazing).

Around the Theatre you can explore some natural caves that are absolutely beautiful. Petra is also known as the rose city and this is due to the wonderful colours of the rocks in this area, so it also worth to take some time to explore the nature around.

Then walk by the Colonnaded Street on your way to the Monastery. It would have been the main shopping street of the ancient city. You will also see the Great temple, one of the major archeological places of Central Petra.

It is time for one of the most challenging parts of your day, visiting the Monastery. After the Treasury, it is probably the most famous and largest monument in Petra. It takes more than 800 rough steps to get there but it is totally worth it and one of the highlights of your visit.

On your way back from the Monastery, head to the Royal Tumbs, four magnificent facades adjacent to each other.

Next to this attraction there is an hiking path to the top of a mountain where you have the most beautiful views from the Treasury. It will take you approximately 2 hours and hundreds of rock cut steps. But the hardest the climb, the better the view and I totally recommend it. Watch out that there is another hiking path allowing you to see the Treasury from above but I was recommended by our local guide to choose this one as it is much safer.

12h hours and 20km after I started exploring Petra I was completely exhausted but happier than ever and ready to continue my adventures around Jordan.

Less than 15m driving from Petra you will find this site with some more great places to explore. Little Petra is also an old Nabatean city with buildings carved into the walls of sandstone canyons. It belongs to Petra archeological park but it is definitely less crowded.

You can walk around for a couple of hours to discover temples, tombs, water channels and incredible views of the valleys around.

Wadi Rum, also known as the Valley of the Moon, is a desert located in the Southern of the country cut into the sandstone and granite rock. It is a must have experience when in Jordan and it was also one of my favourite parts of the entire week.

The rocky desert in fact seems like the Moon or Mars surface and not surprisingly a lot of movies were recorded here like The Martian, Lawrence of Arabia or Red Planet.

I spent there half a day and I decided to have a morning jeep tour with a local guide that took me to the most beautiful and remote places of Wadi Rum. But if you have more time stay there one night in one of the camps to have a great desert experience.

Located in the Northern part of the country, this ancient Roman city with more than 3000 years that combines Greco Roman and Oriental influences is considered the second most important attraction of the country after Petra and it is easy to understand why.

Take half of a day to walk around Jerash as it has so much to discover, including The Forum (one of the most impressive attractions with more than 150 columns), Hadrians Arch, a huge Theatre, several temples and ruins of  different buildings that make us imagine how life much have been in this city thousands of years ago.

It was beautiful to visit in springtime with its beautiful rolling hills, lush greenery and flowers growing everywhere in the middle of the ruins.

Don’t miss the chance to take at least one day to visit the Jordanian capital. Amman is the biggest city in the country combining modernity with ancient ruins and temples.

Unfortunately I only had a few hours there in my last day in Jordan. With limited time there I had to make choices and I decided to go to the Citadel to see amazing views of the city.

It sits in the highest hill in Amman (one of the seven hills that originally made up the city) and it is considered one of the world’s oldest continuously inhabited places.

In the Citadel there are plenty of beautiful and interesting sites to visit as the Temple of Hercules, Umayyad Palace, the Gate of Ammon, Jordan Archeological Museum and views to the Roman Theatre.

Not far away from Amman, Mount Nebo is also a very interesting historical site. More than 800 metres high, you can see from the top of the hill in a clear day the nearby Dead Sea, Jordan River Valley, Bethlehem, Jericho and the distant hills of Jerusalem.

But it is most known because Mount Nebo is the place where Moses is said to have seen the Promised Land after 40 years leading the Israelites in the desert.

This is one of the largest Crusader castles in the Levant and it is located in al-Karak, in the way from Amman to Petra. It is worth to stop there and spend a few hours exploring the castle.

This impressive canyon is located in Kings Way and we stoped by in our way to Petra to take some pictures of the breathtaking panoramic views.

When in Jordan the Dead Sea is also mandatory. In fact it is not the sea but a lake and the world’s saltiest body of water and the lowest lake on the surface of earth – about 400 metres below sea level.

I took the road from Aqaba, a coastal city in the South of Jordan, to the Dead Sea area and it was a great opportunity to have awesome views of the lake. The white waves in the picture are not actually waves but salt!

I’ve stayed one day in a beach resort in the area and I had an amazing experience floating – and I confirm it’s true that you can easily float there. I also tried the famous Dead Sea mud which is known by its skin regenerative properties.

Sleep in a bubble in the middle of the desert

If you ever dreamt about sleeping in the middle of the desert and you like unique experiences and accommodations, I recommend to stay one night in Petra Bubble Luxotel.

Located less than 30m driving from Petra in a dramatic setting with breathtaking views of the desert and the mountains, it offers the opportunity to sleep in a bubble suite with a private hot tube and a deck from where I saw one of the most beautiful sunsets ever. 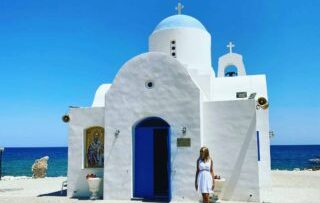 Top Things to Do in Cyprus