“Why did you decide to go to Aruba?” or “How did you discover this island?” Those where the questions I’ve heard the most after coming back from my holidays in Aruba, especially after posting some pictures about this piece of paradise lost in the middle of the Caribbean sea.

So… first things first. Aruba might not be the most well-known destination (at least in some European countries), but it is quite popular for travellers from all over the world, especially from US, South America and Netherlands and it has amazing infrastructures for visitors. Aruba was a cologne of the Netherlands together with Curacao and Bonaire – those three islands are often called ABC islands (Aruba, Bonaire and Curacao) and they are part of the Dutch Antilles. In my mind, Aruba has always been connected with the mystic of the Antilles and I knew I wanted to go there… sooner or later.

Back in 2018 when I decided to go abroad in August for summer holidays, I started my research. Where should I go? I wanted to go overseas and I was thinking about a destination in the Caribbean but end of August might be risky as it is the hurricane and rainy season. That’s when I found that the Dutch Antilles, in the Southern part of the Caribbean next to the Venezuelan coast, are located outside of the “hurricane belt” so the chances to be affected by bad weather are considerably lower – I’ve read Aruba has 5 days of rain per year. It seems quite promising, right? On top of that I’ve been wandering about Aruba pictures of secluded beaches with turquoise waters… My destination was chosen. And it was the best decision ever to visit “One Happy Island”.

Be aware that Aruba is a small island. It has 20km length from one side of the island to the other. Regardless of its size, it has an impressive number of things to do from beautiful beaches, water sports and colonial villages to cactus and wild deserted landscapes.

In my trip, I decided to split my time into two different areas of the island. I started my journey in Aruba staying 3 nights in Oranjestad at Renaissance Hotel, owner of Renaissance Private Island with its famous Flamingo Beach. The rest of my stay was at Eagle Beach, one of the most touristic areas, less than 30m drive from the airport. I loved both locations but Oranjestad and Renaissance Island have a special place in my heart.

Oranjestad is Aruba’s capital and it has the charming vibe of a colonial small town with colourful houses and a strong Dutch architecture influence. I totally recommend you to invest a few hours to walk around and to get lost in the small streets that will eventually take you towards the sea.

You will find in Oranjestad some international shops and restaurants, but choose instead the typical ones where you will sense the real Caribbean vibe.

Next to the harbour and the Renaissance Hotel, Marketplace is a great place to go, a small shopping mall and food court with great options for an informal dinner. I liked it so much that I went there several times.

On the road to the California Lighthouse, this is a favorite by locals and I can totally understand why – it was my favorite beach too! With pristine white sands and turquoise waters it looks like a dream come true. It has some facilities as beach huts to rent and a small beach bar for drinks or snacks.

Another amazing beach with an unbelievable sea color. The famous Divi Tree with its particular shape is located there.

This species is the national tree of Aruba and its neighbor Curacao. Apparently its shape is always pointing southwest due to the trade winds. The most famous divi tree is located at Eagle Beach and its one of the most photographed sites of the island.

Maybe the most touristic beach at Aruba where most of the big resorts are located. You can find all beach facilities and water sports there.

I didn’t go there but it was also recommended as one of the best beaches in Aruba. It’s in the southern part of the island.

I saved the best beach for the end. What can I say about one of the most beautiful places that I’ve ever been that truly reflects its beauty?

The first thing you should know about Renaissance Island is that you have two ways to get there. Either you stay at Renaissance Hotel in Oranjestad and you have free access to the private island, either you buy a day pass (I think you have to buy it in advance as they only sell limited passes for non-guests).

At the entrance of Renaissance hotel and lobby there is a small harbour where you can take the boat that will take you to the island. That’s where the magic begins. Renaissance island is only a 10m boat ride  from Oranjestad but this small journey is beautiful with scenic views of the city and the nearby coastline. When you finally arrive at Renaissance Island you feel that you are entering a dreamland.

There are two beaches – Iguana Beach and Flamingo Beach – and some trails to explore. You also have good facilities as a restaurant and a beach bar.

Both beaches are beautiful with incredibly transparent waters and white sand, but the biggest highlight of this island and what makes it unique is the Flamingo Beach with (obviously) its pink flamingos. I have always loved flamingos since I was a child (way before this flamingos’ trend from last years) so being in such a beautiful natural paradise and be able to observe and even engage with flamingos was a truly unique experience that words cannot describe.

8 Other Things Not to Miss in Aruba

I know that you probably decided to go to Aruba for the beach but… rent a car and take at least one day exploring the rest of the island. You can always stop along the way and discover some new beaches on the go.

Drive from Palm Beach to California Lighthouse by the coastline and you will have stunning views from the Caribbean Sea. At some point you will see a shipwreck. Stop there and take some pictures. Before you arrive to the lighthouse, stop again and take some time at Arashi Beach, one of my favourite beaches in the island.

This white lighthouse dominates Aruba’s landscape and it can be seen from far away. You will have beautiful views from the island and around the lighthouse there are some sand dunes and wild cactus that will make you wonder sometimes if you are not in the middle of the desert. 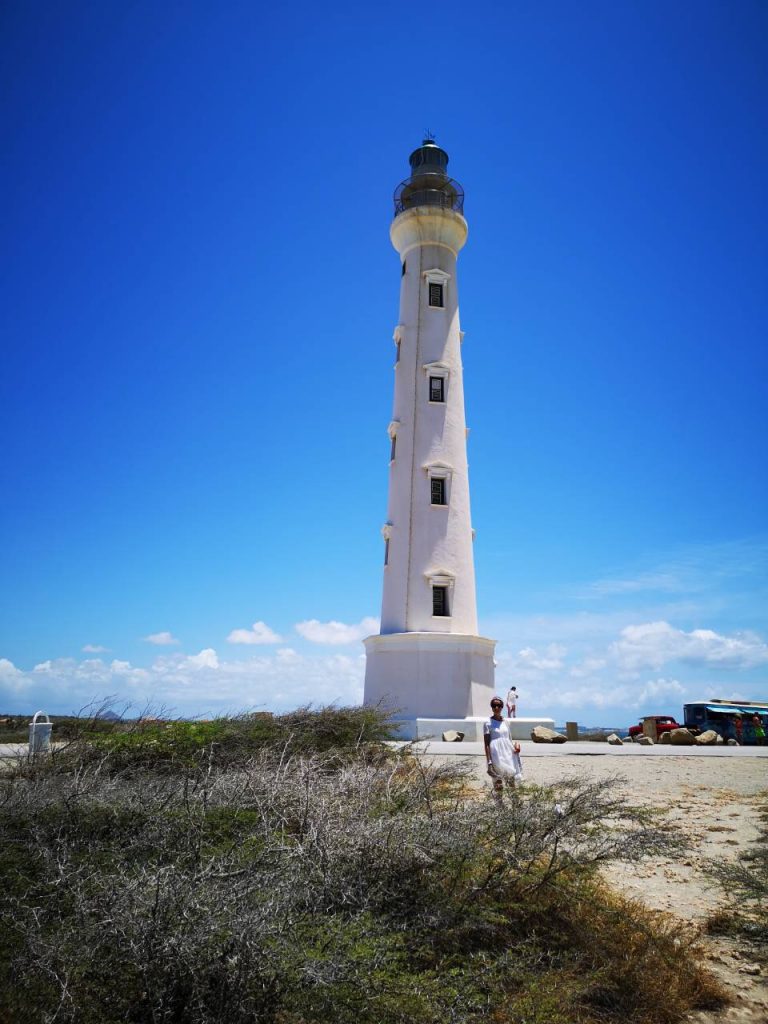 The southern coast of Aruba is all about pristine sands and incredibly beautiful turquoise waters. But if you explore the northern coast you will probably feel that you are in another island. Rocky and adventurous, it has arid landscapes full of cactus plantations (I understood the reason why aloe vera products are so popular there) and a rough and dark blue sea that contrasts with the southern paradise of the island. If you have a jeep you can travel by the coastline there and admire the wild nature of northern Aruba.

This yellow chapel was built in the exact site of the first Catholic Church in Aruba. It’s at the top of a small hill at the north side of the island. To get there take a road lined with white crosses and cactus everywhere.

From Altavista Chapel continue your journey to the next sight, Bushiribana, the ruins of a former gold smelter. It is located by the sea.

It is also known as Conchi (bowl) and this unique volcanic rock formation creates a natural pool that is one of the most visited attractions in Aruba. I didn’t go there but it seems to be amazing.

Don’t miss the opportunity to admire as many sunsets as possible in Aruba. Trust me… they are one of the most beautiful sunsets ever!