Italy is one of my favourite countries and it’s one of those places I’m always happy to go back. This year I finally made it to the Dolomites in Winter, which was in my bucket list for a long time. Because I landed in Milan but I had already been there in the past, I decided to stop one day in Bergamo to explore the city. So let me share with you my tips about what to do in Bergamo and Trentino region in the Dolomites.

The best way to get to this region located in the North of Italy (if traveling from abroad) is by plane. There are direct flights from many European cities to Milan Malpensa or Milan Bergamo airports.

To move around, I recommend you to rent a car. It is the most convenient way to travel in the area and to have the freedom to go to all the places that you want to visit. Book it in advance to get the best deals. If you are traveling in Winter time, don’t forget to check if the car has winter tires (it’s mandatory if you plan to go to the mountains).

The Dolomites is a mountain group located in the Eastern part of the Italian Alps. It is famous by its light coloured dolomitic limestone peaks, carved by erosion in unusual and rough shapes. Be aware that this region is vast and many attractions are far away from each other. Some of the most known areas to visit in the Dolomites are Cortina d’Ampezzo, Ortisei, Bolzano, Tonale Pass or Lake Braies. But there is much more to explore.

I also recommend to plan ahead your itinerary and to have enough time to visit all the places in your bucket list. I only traveled for a long weekend and it was clearly not enough time to explore the Dolomites. So I stayed in the area closest to Milan in Trentino region, which is still more than 3 hours driving from the airport. I would love to go back to explore the other part of the Dolomites, maybe in Summer time to see the region in both Winter and Summer seasons.

I will share with you my travel guide with tips about what to do to Bergamo and Trentino for a long Winter weekend. And I hope you enjoy it as much as I did.

Located in Lombardy in the North of Italy and close to Milan, Bergamo is an amazing city to explore that you should add to your bucket list.

Since the Middle Age that Bergamo played an important role, being the seat of the Lombard Duchies which allowed the city to accumulate a significant wealth. It was an independent city for a long time and in the 19th century it was part of the Austrian Empire, before it was finally integrated in Italy.

Bergamo is split in two different areas, the lower and upper parts of the city. I recommend to stay in the upper part of Bergamo, as it concentrates the majority of places to visit and the most known city highlights. Try to spend at least one full day in Bergamo, but if you have more time it will be ideal to explore both sections of the city.

You can start your visit in Piazza Vechia, located in upper Bergamo. Piazza Vechia is the heart of the city, surrounded by beautiful historical buildings like the Palazzo della Ragione, the Campanone Torre Civica or the central fountain. Stop by one of the terraces where you can have a coffee or some food and fully immerse in Bergamo’s life.

Around Piazza Vechia you will find some of the most known attractions of Bergamo. Don’t miss the opportunity to visit the Basilica of St. Mary Major and its Baptistery, and Colleoni Chapel with its magnificent facade. 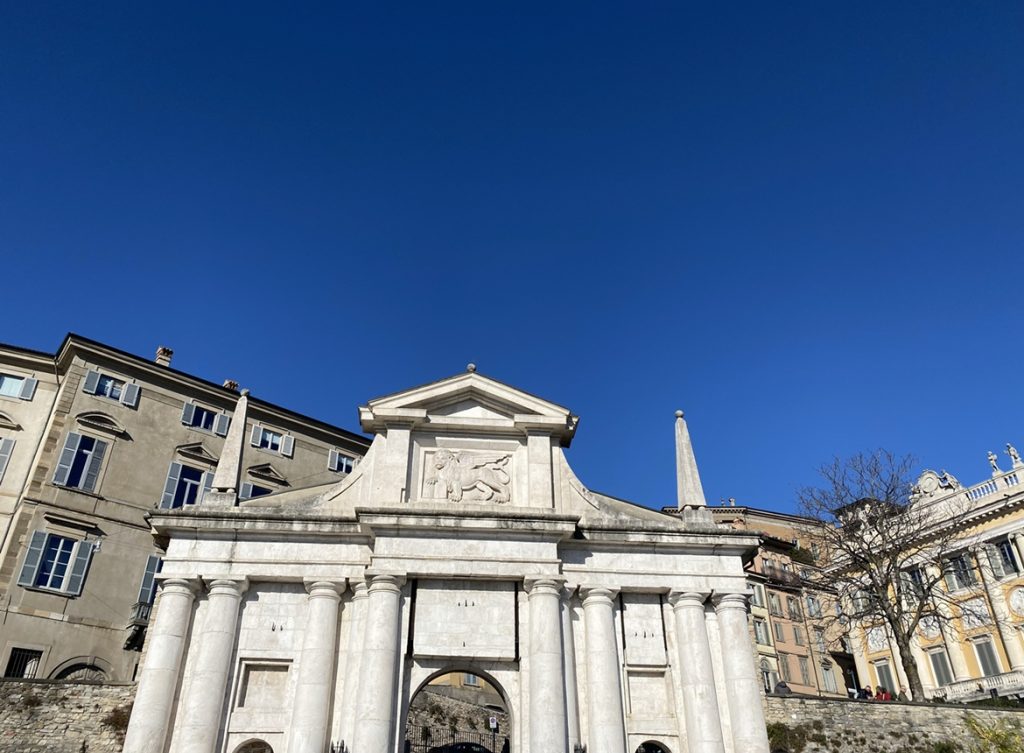 Get lost in the narrow streets and typical squares of Upper Bergamo and take the opportunity to do some shopping or to have some delicious Italian meals in the many restaurants available.

Another mandatory place to visit in Bergamo is the impressive City Gate. Built in the 16th century, this gate is part of the city defensive walls. From there you have some of the most beautiful views to the lower part of Bergamo. This is also the perfect place to start walking along the Venetian Walls. With more than 4km surrounding this part of the city, they gained UNESCO recognition in 2017. In the north part of the walls, you can visit Rocca Museum, an old defensive bastion with a round tower and a great park near the fortress.

To get to the lower part of Bergamo, the easiest way is to take a funicular which is connecting both areas of the city since 1887.

The lower part of Bergamo has also some interesting places to visit like Piazza Matteotti, Accademia Carrara or the most famous shopping street – Via XX Settembre.

Just one hour drive from Milan in Italy’s lake region, Lake Iseo is definitely worth a visit if you are traveling in this area. With many quaint villages and outstanding lake views, you can explore it by car (to circle the lake driving, it takes you around 2 hours) or by ferry in summertime. For trekking lovers, I’ve read the Ancient Valeriana road is the most popular itinerary in the lake.

One of the most iconic places in Lake Iseo is Monte Isola, a beautiful island in the middle of the lake. Did you know this is the largest inhabited island in an European lake?

There are also several towns to explore in this area like Iseo, Pisogne, Lovere and Sarnico. I spent some time in Lovere and I immediately felt in love with it. Located at the shores of Lake Iseo with outstanding mountain views, Lovere was considered one of the most beautiful villages in Italy. And I totally understand this distinction.

Visit the historical centre of Lovere and get delighted by the beautiful architecture. Don’t miss some highlights like the Basilica of Santa Maria in Valvendra, the Sanctuary of the Loverese Saints Capitanio and Gerosa, or the Civic Tower from where you have top views to the city and the lake. In the lakefront area there are many options of restaurants and terraces.

Walk by the lakeside promenade and enjoy the views to the surrounding nature and to the lovely Lovere village. It’s also worth to stop by the Tourist Port, one of the biggest lake ports in Europe.

Not far away from Lovere, between Castro and Riva di Sota you will find beautiful gorges overlooking the lake. To admire the views, stop in Bogn di Zorzino.

At 1883m high, Passo del Tonale is a ski resort at the foot of Present Glacier in Trentino-Alto Adige region. The skiing area has more than 40km of pistes connected to the slopes of Ponte di Legno, Valle Camonica and Temu.

It has many facilities in terms of accommodation, restaurants and shops, so it can be a convenient location while exploring this mountain area.

In the main road of Passo del Tonale you will find a memorial built in 1936 to honor the Italian soldiers that lost their lives in the First World War.

Vermiglio is another beautiful village in Trentino, near Passo del Tonale. In fact is is formed by three small villages that were united in one single locality. It has surrounding beautiful landscapes and it is also a great place to stay in the region.

There are some relevant monuments and museums dedicated to the years of war in the area during First World War like the Strino Fortress, that has been recently restored. 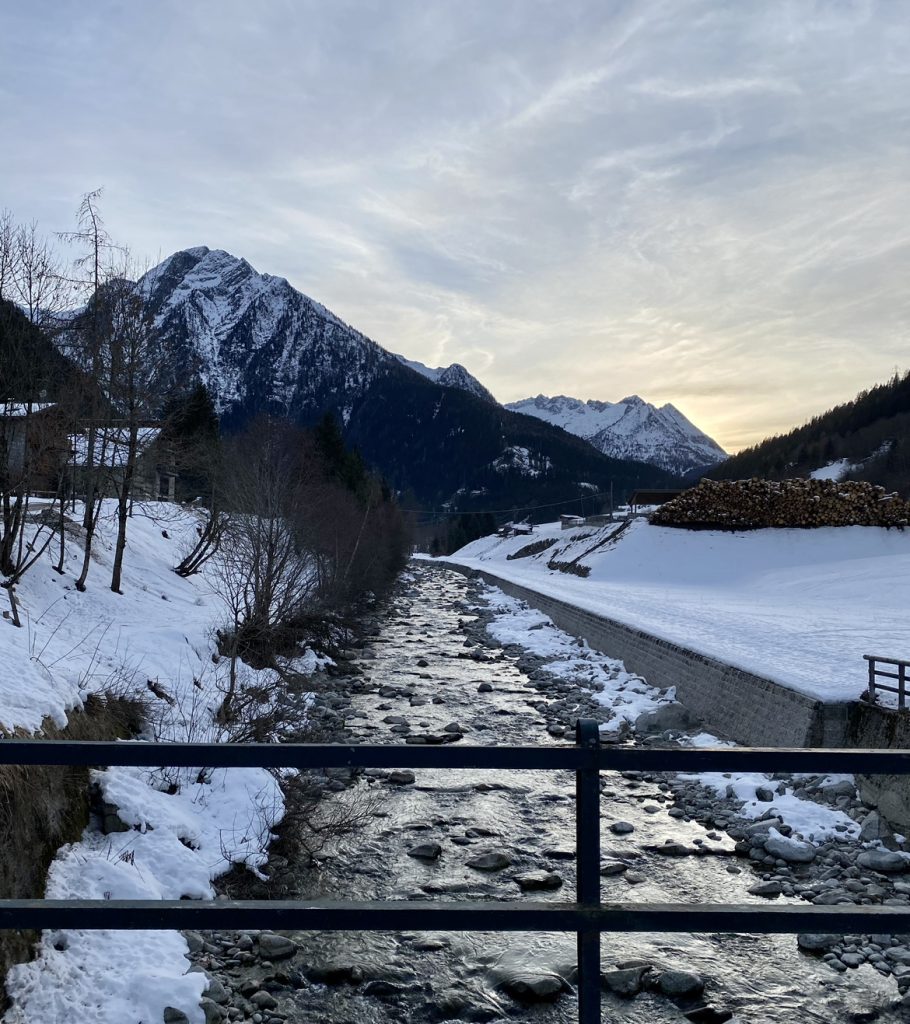 Located in Val di Sole in Trentino, Ossana was one of my favourite villages in the region. Surrounded by the mountains, it looks like a fairytale village in Winter time with snowy landscapes.

Since Middle Age Ossana has played an important role in the upper Val di Sole, being its political and ecclesiastical center. Due to that reality, it has some interesting places to visit like the Castle of San Michele, Santa Maria Maddalena church or the “Park of Freedom“ in the east of the village.

Located in Stelvio National Park in Trentino, Val di Rabbi is a beautiful and typical alpine valley which is great for Winter vacations.

It has been well-known for centuries for its highly carbonated sparkling waters with therapeutic properties. There is a spa in the village, which was temporarily closed when I visited.

Another attraction in the area is the suspension bridge, built in 2016 at a height of more than 1300 meters, above Ragaiolo river waterfalls. This was one of the main reasons why I went to Vale di Rabbi, but when I visited the path to the bridge was quite icy and I didn’t have trekking sticks. After a few hundred meters of walking, I decided to go back because it wasn’t safe. So if you go to this area in Winter time, make sure you have the right equipment. But don’t miss it if you visit it in another season. That’s still in my bucket list! 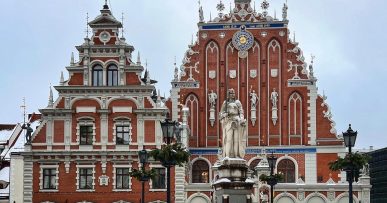 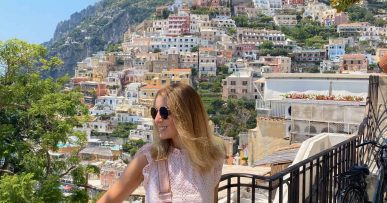 Travel Guide to Positano and Ravello